Anantapur is one of the major cities of the south Indian state of Andhra Pradesh. It is the district headquarters of Anantapur district. The city has seen a great deal of development in terms of real estate and infrastructure in the past decade. People from different parts of the state and the country have made Anantapur their home.

Anantapuram is a district in the Rayalaseema region of Andhra Pradesh. Anantapur is the district headquarters and one of the most important cities of the district. Over the past decade, the region has seen great development in terms of infrastructure. It is a popular tourist attraction of the region as well.
Today is the time where we all are driven by technology. Considering the technological advancement, a large number of government departments have started their own website. People can access information, register complaints and grievances etc.

Anantapur has always been an integral part of many dynasties. Due to its strategic location it was an important center for the British Army during the Second World War. It is believed that Anantapur got its name from 'Anaatasagaram', a big tank, which means "Endless Ocean". The villages of Anaantasagaram and Bukkarayasamudram were constructed by Chilkkavodeya, the minister of Bukka-I, a Vijayanagar ruler.

During the Vijaynagar period, Anantapur was an important center. It was popularly known as "Hande Anantapuram". Hande means chief of Vijaynagar period. Historians say that Anantapur and a couple of other places were gifted by the Vijaynagar rulers to Hanumappa Naidu of the Hande family. Subsequently Anantapur came under the rule of the Qutub Shahis, Mughals, and the Nawabs of Cuddapah, although the Hande chiefs continued to rule as their subordinates. The British took control of Anantapur as a part of their treaty with the Nizams.

Anantapur district was formed in 1882 when it was separated from Bellary district. Sir Thomas Munro was the first Collector. Today Anantapur district is divided into 5 Revenue Divisions and these divisions are further divided into 63 Mandals. It is the largest district in Andhra Pradesh and is spread over an expansive area of about 19, 100 sq. km. The following six rivers flow within the district.

Anantapur is located at 14.68°N 77.6°E. It has an average elevation of 335 meters. Anantapur district is bounded by Bellary and Kurnool districts on the north, Cuddapah and Kolar of Karnataka on the south and east respectively. 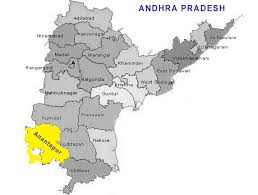 The climate of Anantapur is semi-arid. Since the elevation is quite high, the region has a tolerable climate all through the year. Summers usually commence in March and reach the peak in May – June.
The dry and warm months of March – May have temperature ranges between 29.1 C to 40.3 C. November – January are cooler and the average temperature ranges between 22 C to 23 C.
Shifting the focus to monsoons. The region receives pre-monsoon showers as early as March. The region witnesses full monsoon during September – November.  Since Anantapur is quite far from the east coast it does not benefit from the North East Monsoons. Also it is cut off by the high Western Ghats, thus, the South West Monsoon is also prevented from reaching the region. The normal rainfall of the district is 553.0 mm.

According to the 2011 census, Anantapur had an average population of 262, 340. The sex ratio was 995 females for every 1000 males. The average literacy rate was 82%. Male literacy rate was 89% and female literacy rate was 75%. It can be rightly said that Annatapur has a multicultural society. People from different parts of the country are settles in Anantapur. Telugu, Urdu, English and Kannada are the predominant languages spoken in the region.

Following are some of the notable personalities who have made their mark in different walks of life.

Anantapur city is 354 km from the state capital, Hyderabad and 200km from Bengaluru. it connects Hyderabad to Bengaluru through NH – 7. The district has a strong connectivity of roads and is very well connected to the other cities of the state and the neighboring states. It has direct trains to Hyderabad, Pune, Delhi, Mumbai, Ahmedabad, Adoni, Vishakhapatnam, Jaipur etc.
Nearest Domestic Airport – Puttaparthi Airport (80 km)
Nearest International Airport – Bengaluru Airport (168 km)

Explore more about Hotels and Restaurants in Anantapur